Grégoire Allaire (École polytechnique) ran a Seminar@SystemX on May 3 on the following topic: “Taking into account additive manufacturing constraints in topology optimization of structures”.

We propose some new functionals, to be used in shape and topology optimization problems as a means to enforce the manufacturability of structures by additive manufacturing processes. Instead of considering merely the final shape, they aggregate objective functions (like compliance) for all the intermediate structures of the shape appearing in the course of its layer by layer assembly and subject to their self-weights or to thermal loadings due to the fabrication process. Typically, these functionals penalize overhangs, thermal residual stresses and thermal deformations in the build direction. We compute their shape derivatives and implement them into a shape and topology optimization algorithm based on the level set method. It turns out that this class of constraint functional is very costly to evaluate, due to the large number of successive layers required to build the final shape (each of them requiring a finite element analysis). Therefore, we introduce an interpolation algorithm which significantly accelerates the computational effort. Eventually, a numerical validation and some concrete examples are discussed. 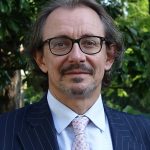 Grégoire Allaire is a Professor of Applied Mathematics at Ecole polytechnique. His research focuses on the mathematical modelling, numerical simulation and optimization of physical and mechanical problems. He is a specialist of multi-scale analysis (homogenization) and of shape and topology optimization of structures. He has published 8 books and more than 180 scientific papers. For more information.